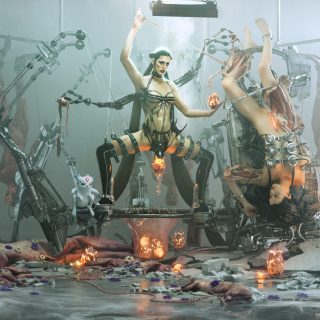 1. Doña
2. Prada
3. Rakata
4. Tiro
5. Luna Llena
6. Lethargy
7. Araña
8. Femme
9. Muñecas
10. Confianza
11. Born Yesterday feat. Sia
12. Andro
Upon the release of KiCk I, news surfaced that Arca would be confecting three more albums under that name. The artist took to Pitchfork to say: “There will be four volumes. The third one is a little bit more introverted than KiCk I, a little bit more like my self-titled album, I guess. The fourth one is piano only, no vocals. Right now, the least defined one, strangely, is the third one. It’s all gestating right now […] Each KiCk exists in a kind of quantum state until the day that I send it to mastering. I try to not commit until I have to. But I have a vision for it. The second one is heavy on backbeats, vocal manipulation, mania, and craziness”.
In the following year, Arca released her extended play “Madre” and took part in “Dawn of Chromatica”, the remix album of Lady Gaga’s sixth studio album, where she remixed the Ariana Grande collaboration “Rain on Me”. On September 27, the producer released a new song, “Incendio” to critical acclaim. A week later, she revealed the release date, tracklist (not featuring “Incendio”) and cover art of her upcoming album, and, on October 4th, its lead single, “Born Yesterday”, featuring Sia.